The British Motor Show parks itself in new offices in Salisbury

The business initially set up in 2019 when Andy Entwistle, Chief Executive, acquired the brand The British Motor Show, and worked from home.

As the world opened up, Andy and the team quickly realised that their business needed the interaction and creativity only found by being in an office.

“We were missing out,” says Andy.

“We found that WFH was fine, but it lacked creativity and our ability to develop the business as quickly as we needed.  So, we went out to seek out first business home.”

Bill Parker, director of Ameriscot Commercial, has found this particular issue to be true with other companies too.  “The WFH style was imposed on us all, but I have seen so many of our tenants flourish as they reconnect and value the human bond of being in the same space.

An office is where the magic happens.”

The search for offices by The British Motor Show wasn’t long as Andy and his colleagues quickly recognised the benefits of Warner House for an SME were big.

“It has a presence that we just simply couldn’t get from some of the alternatives on offer in Salisbury.  Or staying as we were.

We love the facilities: the free hub space, the scene-stealing reception and the on-site café.  And we make regular use of them.”

“We took office space without needing to stretch our budget to include some of these facilities in our own office suite. Another plus,” says Andy.

Bill mentioned: “Salisbury is a fabulous city to be based in and The British Motor Show, in conjunction with the City Council, is hosting a one-day car show later in the month.  The team at Ameriscot is already making sure they are free to visit.”

Salisbury Motor Show is a one-day event on 29th May and is free to attend.  The show will include 100s of supercars and Tim Shaw of Car SOS will be in the central square of the city chatting to people.

Everyone will be able to have a look at some amazing examples including Aston Martin, Porsche and McLaren.  Along with classic cars such as Morris Travellers and Ford Escorts.

A full concourse to view the development of the motor car and bring you bang up to date with a range of EVs to show where the future of the car is moving. 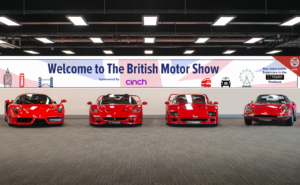